THE BIG ACCUSATION WAS THAT CANCUN DID NOT EXIST IN 1963.
THIS WAS SUPPOSED TO 'PROVE' I DID NOT TELL THE TRUTH.

In 1963, a map was printed -- dating from 1843--- in a book that was available to me and Lee, about the Yucatan.  Look carefully at the map and you can clearly see why Lee and I considered Cozumel as a drop-off point for me, since our goal was to hike to Chichen-Itza, and after that, to go on to .Merida However, there was supposed to be an old railroad we could walk along all the way, starting from the Cancun/Kankun area, so we wouldn't get easily lost. Our final decision was to have me dropped off on a hard, sandy beach near the village of "Kankun" (spelled that way on the first map we saw). It was also spelled "Cancun" on other maps.

According to the trolls who follow me around  and who write articles based on each other's versions of what I actually have said, Cancun supposedly did not exist until the 1970's.
On this 1843 map, "Cancun" can be seen above the 21 degree line. 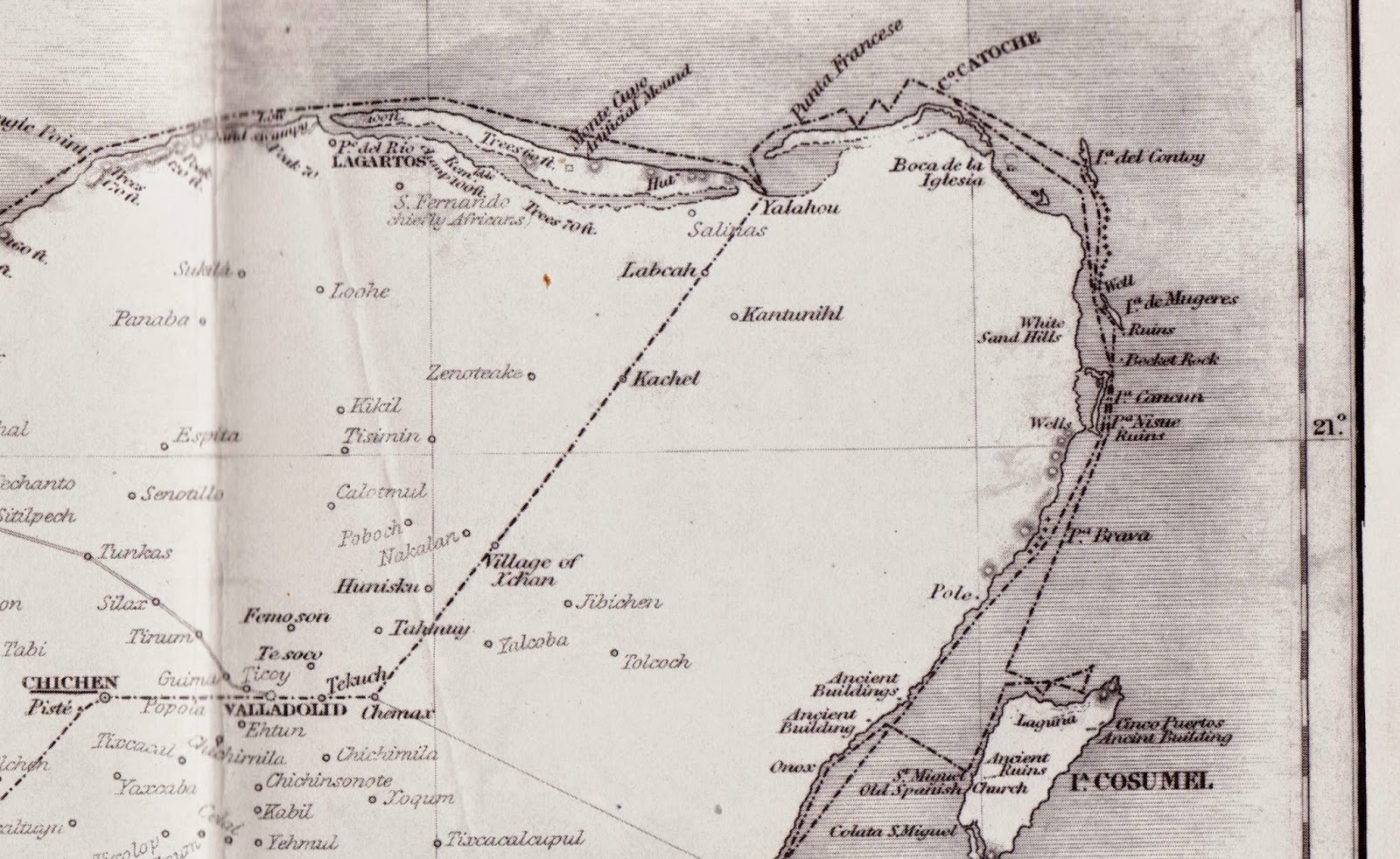 Note that two trips by boat were made to the village (see dotted lines). The map was drawn no later than 1843 and was published in 1963 in the book Incidents of Travel in the Yucatan by John L. Stevens, through Dover Pub. Inc, NY.  A friend kindly sent this book, for which I'd been searching for years.
Also note "CHICHEN" -- to the left.  It is underlined, indicating ruins were observed at that site.  One of the dotted lines shows the route that tourists took all the way back in 1843 from the coastline to reach Chichen Itza. The map below this one is a larger part of the same map.  It shows that from Chichen Itza, you can trek on to Merida. That was our plan, and Lee and I studied such maps to plan our jungle adventure. 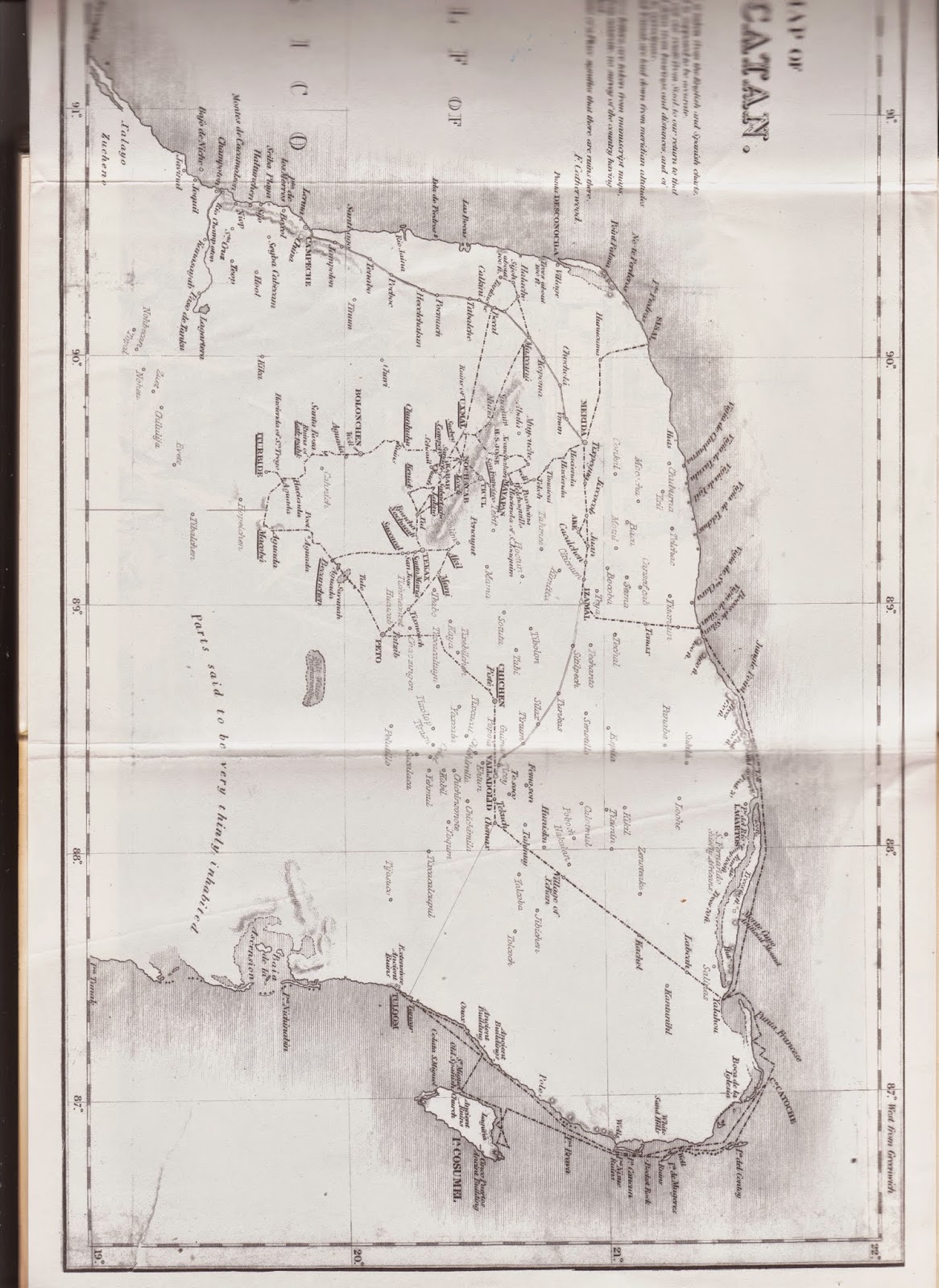 Read George de Mohrenschildt's account of how Lee desired to make a long jungle trek just as George and his wife had done.  I had been fishing since age 3 and loved the outdoors.  To us, it was the perfect way to escape the problems we had encountered.  The dotted lines show the various routes of treks taken by Stephens, Catherwood and Cabot in the early 1840's. Catherwood drew the map. You can't miss the village of Cancun.  The outcry that Lee and I were going to meet at a village that did not exist will no doubt be replaced with another outcry based on some other groundless objection. Please copy this material: the Internet may not be free or uncensored in the future. (Thank you)


NOTE: I NEVER said Lee and I planned to meet in a fine hotel in Cancun, and then get married. I have repeatedly corrected such mis-statements for years now.  The Cancun matter was an insertion by my literary agent that was missed by Dr.Platzman, who was writing a book (Deadly Alliance) using my emails and phone calls. Originally, I'd only said "Mexico" until the agent insisted on my being more specific. He then inserted "Cancun" in Dr. Platzman's manuscript, who took the blame for allowing it to remain in the manuscript. But it was my fault, too. A section of dialogue that I later wrote, and take responsibility for, includes several phrases indicating that we would meet in Cancun.   I wrote it that way to make sure people could find the area on the map.  Certainly Lee and I did not plan to even spend the night in that area. We would have set off immediately for the abandoned railroad we'd read about. God forgive me if that wasn't made clear enough. The comment Lee made about a "fine hotel" meant, to me, that it could be located "anywhere" -- most logically, on our way to Chichen-Itza.  For HOW does one describe a general area on a present-day map, near Cancun, without mentioning Cancun?  My suitcase was packed with survival equipment! I described the area where I was going as a place I'd be afraid to go to, except I knew Lee would be there. Does that sound like a pleasure resort?
Since Lee often made wry jokes, I had no way of knowing if he was serious or not about our staying in a 'fine hotel.' It made absolutely no difference to me. Was it 'definitely' a joke? I don't know and never did.

Lee never mentioned Merida as a meeting place. He spoke of Merida in other contexts. I decided this must have been the 'city' in the Yucatan where we hoped to marry - on my own, as he mentioned we would be flying from the city where we would marry on from there to the Cayman islands. When, later, I learned that flights from Merida to the Cayman Islands were known to occur, I then assumed the city was Merida.

One statement made was that "Judyth and Oswald actually planned to meet in Belize, Mexico - 350 miles from present-day Cancun. (Note: There was no Belize in 1963; it was called British Honduras until years later.)" In actuality, we planned at one time to meet in BELIZE CITY, Honduras.
At one point in our plans, we planned to meet near present-day Belize. [THAT IS, BELIZE CITY]I have no idea how to describe the location without using the word Belize. Do you? I have no idea what the location was called in 1963. It was the first place we were interested in while making our plans. We had guessed that this was the secret site where the film NIGHT OF THE IGUANA had been made, and thought there might be some vestige of civilization remaining behind after the film had been shot. The place had been described in the newspapers as spectacularly romantic. Later, we changed the meeting place nearer to where the ruins of Chichen Itza were located. Later, a statement was made that

"Judyth and Oswald actually planned to meet in Puerto Vallarta, Mexico - well over a thousand miles from present-day Cancun."

This whopper was also published: "Judyth and Oswald actually planned to marry in the Cayman Islands of the Caribbean; Cancun was just a stopover."

In actuality, Lee and I planned to both divorce and then marry - in Mexico. Exploration of ancient Mayan ruins and a visit to a large city in the Yucatan were additional possible plans. After marriage, final destination was probably going to be the Cayman Islands after things became more dangerous.

There are other false accusations: here are a few of them: "On November 22, 1963, Judyth and a number of her co-workers set up chairs and watched the assassination of John F. Kennedy on television."   On November 22,  I observed my boss, Mr. Mays, and several others bring in stools to watch the TV at noon. They exhibited what in my mind was undue interest, keeping the TV on past lunchtime, which was an hour ahead of Dallas time. Several chairs already in the lab were also used. I didn't help set up anything. What we did watch, of course, was the constant news that was on TV from about 2:00 PM our time, onwards.   The assassination itself was never televised. The events of the day of the assassination were observed on TV at PenChem.

Hewre's another: "Oswald's friend George De Mohrenschildt knew about the assassination ahead of time, and had agreed to help take care of Oswald's wife and children afterwards." In actuality, George DeMohrenschildt was asked by Lee to help Marina and his children in case something happened to him long before any of the events transpired in Dallas. I never said George had anything to do with the assassination itself.  I have only guessed at the extent of George's knowledge, since Lee said he had confided in him; I was asked my opinion and gave it.  It was almost immediately misinterpreted.

How about this one? "Judyth has proof that Oswald was innocent of John F. Kennedy's assassination; she presented it to filmmaker Nigel Turner and he filmed it for his documentary, The Men Who Killed Kennedy: The Love Affair." In fact, it is I, myself, who stands as a witness that Lee Oswald was innocent of John F. Kennedy's assassination, since he expressed to me his potent grief and anger over the plot. I presented proof of having known Lee Oswald well enough that it was reasonable to assume that he might have confided these matters to me. In fact, he did so.

The next accusation was that "Beyond her word, Judyth has no evidence regarding anything related to John F. Kennedy's assassination." What I do present, of course, is my knowledge of Lee and my relationship to him up to 37 1/2 hours before the assassination.  Read the book Me and Lee and decide for yourself if I have enough evidence. Talk to me, while I'm still alive. See with your own eyes what materials I saved--and I do not own that many things, but kept these. Above all, if I wanted to 'make money' or wanted attention, all I had to do was to say Lee DID kill JFK. All my witnesses and evidence would be VERY popular with the press. Movies would be made.  I'd be praised for 'proving' a Lone Nut killed JFK. But it's not true. I cannot be influenced. I live in exile and have to continually correct [usually deliberate] misrepresentations of what I've actually said, done and lived. My life is not easy, but I am at peace. let the "critics" keep throwing stones. It is not I who lives in a glass house.

Posted by Judyth Vary Baker at 10:59 No comments: