Remembering the Words of Lee Harvey Oswald in ME & LEE

It has been difficult for some people to believe that I could remember the conversations that Lee H. Oswald and I had together -- or other conversations, for that matter,from those long-ago days.
I searched the Internet to see if anyone else has reported recalling conversations from the past, verbatim. The person below describes the same kind of recollection ability that I have, "like a movie playing in my head" --and also reports the same ability to remember everything on a page by just looking a it, without studying, (though I didn't have any cognitive problems)-- a skill now lost since my head injuries:


"...it seems there are quite a few oddities with regard to my memory, like how I can remember conversations verbatim for years, like a movie playing in my head. And being such a strong visual thinker I would memorize the pages in my textbooks to "look at" when testing, which really had nothing to do with developing total cognitive understanding of certain difficult subjects, but helped me score a good grade. Could this be what they refer to as a photographic memory?"
(ref: http://boards.straightdope.com/sdmb/showthread.php?t=246017 )
It was brought up there that just because you have confidence in your memory, that doesn't mean it's accurate -- a point well taken.  However, I did write down enough to keep my memories accurate, and the conversations, moreover, were very important, since they had to do with my cancer research career, planning to kill Castro, life with Lee (whom I dearly loved, who died before my eyes on TV), and knowing Lee Oswald was blamed for Kennedy's death.  The murder of a President makes you pay attention. You knew it was going to happen--some might blame you for not 'warning' anyone, even though to talk about it could get brave people killed who were trying to stop it --an abort team.
The sense of responsibility becomes great, and as time passes, the burden is also heavy and sad.  If I forgot what Lee and others in New Orleans had said, I knew I would do a disservice to posterity.
__________________
It is well known that I kept numerous items from my cancer research efforts and from 1963.  Some people, such as Martin Shackelford and family members, knew I also kept diaries and two scrapbooks, as well as items once hidden behind photos and inside my many books.  An important diary was destroyed in 2001--  items from that diary had been copied onto sheets of pink paper when I had been practicing typing in 1963, at the A-1 Employment Agency in New Orleans, two entries of which are shown in the book Me & Lee: How I Came to Know,Love and Lose Lee Harvey Oswald.

Many conversations were recorded in 1965 and 1966 by inserting them into two unpublished novels I wrote --Chicken Little, and Six Foot Seven. Chicken Little was about my life before going to New Orleans, but was highly fictionalized to hide what I feared to reveal to the world directly. This book nearly got published, since my once-friend and author Willa Gibbs (A Fig in Winter -1963, and The Shadow of His Wings -1964) had read it and recommended it.

Six Foot Seven, as I have long told researchers, was a book with Gerry Patrick Hemming as its main character. Researchers have seen the 600-page manuscripts for each of these books.

Within those pages many conversations were thus saved, but atop this, various diary entries and a firm resolve to REMEMBER Lee Oswald's words, in particular, kept them alive,and in context, in my memory. As I have long said, wouldn't YOU feel a responsibility to remember the words of an innocent man accused of murdering a US President?  I had a duty to his family and to my country not to forget.

For almost every event, I had written down portions of the conversations, though masked because of fear. Some were in the form of short stories or poems, as well.  I soon learned that my husband --who did read Six Foot Seven-- never dreamed the book was semi-autobiographical in nature.

I was "Nancy" in Six Foot Seven (later called The Pariah) and "Stephen" was my lover who was married to "Anna."  Though all characters were purely fictional, I was able to insert Lee's words and my own within those pages.  It was easy because it had already happened to me.  Here is one example, where Stephen tells Nancy, on their way to a hotel, that he is going to leave his wife, which concerns and saddens her, because she knows their respective mates will not take the news well (Lee had told me that he had set aside money for Marina) (click to enlarge):

I had found a way to insert such words as these into sentences in a context similar to what had actually happened in my life, which helped preserve not only the conversation, but also the general chronology.
Other conversations were so deeply embedded into my memory that I would never forget them, though a word or two might vary.

As to the pain and fear that came with hiding these things for so many years, it created a deep sense of melancholy.  When I finally decided it was time to speak out, I literally shook from head to foot with fear. I well understood that my family would be shocked and that some would not believe me, while the true enemies of the truth would pillory me and ruin my reputation.  I knew I could even get killed, because some of these people were still around, in high places.  Think of those who do not hesitate to arrest, to torture, in the name of preserving 'democracy.' Think of how we have people in Congress who have called out for the Wikileaks founder, Julian Assange, to be executed! Shot dead!
So I got on my knees and prayed.
I prayed -- hard-- for guidance from God. At that time, I wrote these  words: 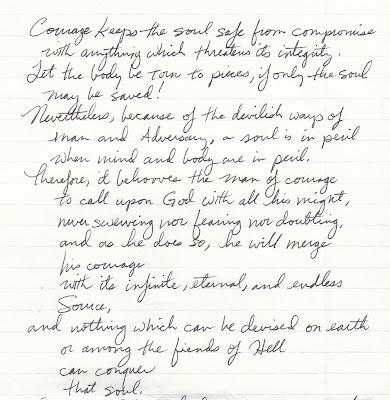 The writing goes on for several pages.  Every once in awhile,I'd read it and ask God to strengthen me for what was likely to be ahead.  Above all, I did not want to be mean or nasty to critics.  It was my responsibility to be patient with those who had not gone through what I had.  After all, the government had told so many lies. It would not be easy to believe that Lee Oswald had been a hero.  Ten years ago, when I said Lee had made efforts to save President Kennedy,nobody believed me. I was urged not to mention it. But I did so anyway, even though it was thought an outrageous thing for me to say.
Now we have secret service agent Abraham Bolden telling author-activist James Douglass, Dr. Jim Fetzer, and Robert Groden that an informant named "Lee" saved Kennedy's life in Chicago.  And more evidence has emerged providing proof for what I stated so long ago.
Of course there were other things I brought up--such as Lee working with Customs, long before researcher Joan Mellen brought out details (after I told her about the matter -- which she has always failed to acknowledge, as Dr. Howard Platzman pointed out in 2008, who was privy to my telephone conversation with her). Customs agent Charles Thomas and I were introduced by Lee Oswald on the steps of the Customs House in New Orleans.
So I had one immense advantage over others who had written books about Lee H. Oswald.
I had been there.
Thus, I knew AT ONCE who was telling the truth in these matters, who was guessing, and who had true knowledge concerning Lee.
I quickly realized how much was still unknown, for I was a witness with experiences researchers did not have, and they were confused, drawn away from the truth by clever Warren Commission defenders who obviously knew what they were doing and HAD to have motivation for what they were doing: these people knew they were lying, but lied anyway.
I consider many of these people misguided, perhaps thinking it is good for the country to keep the Coup d'etat a secret forever. But others allow or even help an illegal government to continue to destroy our nation.  We are a cowed people in a dying nation that desperately needs to wake up and defend what's left of our tattered standards of freedom and liberty, as a republic of free people, before we become a fascist police state.
We're almost past the point of no return.  Technology that will invade every private domain, gilded lies, crooked computers, skewed "polls" and a sold-out media might prove too powerful to overcome.
Still, I had to hope that some people still cared. That was the hardest lesson to learn of all, because I was harmed.
But it was true-- people DO care! People DO want the truth!  People WILL help a whistleblower to survive.
It has been worth every sacrifice to find that out.
JVB
Here's a longer article on SCRIBD about my decision to rermember what Lee told me:

HERE ARE VIDEOS ESPECIALLY IMPORTANT FOR YOUNG PEOPLE.
Copy this link and send to everyone who can access YOUTUBE :