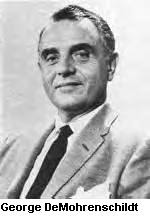 From audiotape given to me, made by Willem Oltmans, The Netherlands.

I have also stated, for the record, that Lee Harvey Oswald ADMIRED John F. Kennedy.  In my book, Me & Lee: How I Came to Know, Love and Lose Lee Harvey Oswald, I explain how Lee gave his life trying to save Kennedy's.

Learning more about George deMohrenschildt is a key to understanding Lee Oswald, who, after all, was just 22 years old when George first met him.  Internet media describes DeMohrenschildt's testimony before the Warren Commission as to be more trustworthy than what he finally wrote in his book I'm a Patsy!  But DeMohrenschildt stated clearly in his book and on tape that he regretted betraying his young friend before the warren Commission, was ashamed of himself for doing so, and had determined to set the record straight.

Online media pro-official version sources want us to believe that because deMohrenschildt produced a favorable portrait of Oswald later, we are to forget about that because it differs from the 'original' version.  George still retells some of Lee's flaws and faults -- as he correctly observed, Russian women strike their mates, and Lee had picked up "that Russian habit" which was not appropriate in the USA.  I,myself, saw Lee struggle with --and conquer -- his inclination to hit Marina, who clearly mocked and humiliated him even in the presence of others, as numerous taped statements by DeMohrenschildt and by his wife Jeanne indicate.


HISTORY BEHIND THE TAPES, THE DEMOH BACKYARD PHOTO, AND THE DEATH OF GEORGE DEMOHRENSCHILDT
Dutch journalist Willem Oltmans brought de Mohrenschildt to Holland from Texas in 1977. From Dutch sources I spoke to in 2003, it was generally believed that de Mohrenschildt, who had been placed in a mental institution in Texas after he declared he had been seeing visions and hearing voices, may have been drugged.  His wife, Jeanne,upon being convinced that this might have been the case, agreed to accompany her husband to Holland along with Oltmans.


It turned out that deMohrenschildt had been writing a book about Lee Harvey Osdwald, who, as many Russian did, sometimes called him, therein, Harvey Lee Oswald ('Lee' implied 'oriental' or "Chinese" to the Russian-speaking community at the time,linguistically).  He began reading the contents of his book in a series of taped segments, often interrupted by questions from Oltmans and by comments from Jeanne. There is no evidence of mental disturbance in DeMohrenschildt's tapes.


DeMohrenschildt had sometimes mentioned suicide in the past, but at the time of his so-called suicide later that year, with the promise of his book getting published, having received a $4000 payment for his story in Reader's Digest, he supposedly did just that --under unusual circumstances:


"On March 29, 1977, while on a break from the interview [with Epstein], de Mohrenschildt received a card from Gaeton Fonzi, an investigator for the House Select Committee on Assassinations. That afternoon, he committed suicide by shooting himself in the mouth with a shotgun."


A HEAP OF BODIES COME BEFORE US AS A RESULT OF THE HSCA'S INVESTIGATION. DEMOHRENSCHILDT'S TIMELY DEATH WAS ACCOUNTED A SUICIDE, UNTIL INVESTIGATED CLOSELY:


First, Epstein's word came into question as to the suicide(from Wikipedia):

David Bludworth, The State's Attorney, was a folksy, charming and savvy interrogator. He began by telling me that De Mohrenschildt had put a shotgun in his mouth and killed himself at 3:45 p.m. There were no witnesses — and no one home at the time of the shooting. The precise time of his death was established by a tape-recorder, left running that afternoon to record the soap operas for the absent Mrs. Tilton, and which recorded a single set of footfalls in the room and the blast of the shotgun, which was found on the Persian carpet next to him. No suicide note or other clue was found. He said I was probably the last person to talk to him. Then, he asked whether I had in my possession De Mohrenschildt's black address book. I replied "No." He politely rephrased the question, and asked me again — about a half-dozen times, whether I had the black book.

But Epstein was incorrect — three people were at home at the time: the housekeeper was downstairs in the kitchen, and the cook and gardener were in the backyard."
ONLY after his death did the final "backyard photo" show up---a copy of another backyard photo upon the authenticity of which we must assume due to Jeanne's --not George's--statements:


Gaeton Fonzi was on his way: instead of finding a talkative George, there was suddenly a dead body. Curiously, ONLY THEN did the DeMoh backyard photo --never previously mentioned by George-- show up.  On the tapes, Jeanne often interrupted her husband, and many of these interruptions contained negative remarks about Lee's comportment, which she sometimes later amended to a more positive note.  It must be remembered that Jeanne had worked as a designer for Abraham Zapruder, who filmed Kennedy's assassination.


She might have been compromised --by fear, or a threat --to produce the photograph and say it had been found in their belongings. She was not living with George at the time of his death. He was visiting a daughter. It was Jeanne who turned over George's manuscript to the HSCA.  We do not know if she edited it.


"if you listen to the tape you hear this...beep-beep-beep-beep-beep---THE SECURITY SYSTEM...shows that someone ...opened the door and... [came] in the house..." --just before George 'killed himself."