Many of my paintings feature New Orleans, nature's impact on the human heart, and the life of the downtrodden. I also paint mountains, cityscapes, animals, select portraits, modern impressions. I love to interpret modern life and themes. Elements of sorrow or horror may gleam here and there between bright green leaves. Life can be hard, but I still believe in courage, love, beauty, and the ultimate high potential of humanity to do good. My book of poems, A Dangerous Thing to Do, expresses these ideals and standards and includes biographical poetry and death poems about Lee Oswald.

I've also written a book of children's poems -- When the Clouds Came Flying By -- expressive, rhythmical, dramatic poems for classrooms, home schools, and speech and drama classes -- funny and fun to read aloud , many of these poems focus on ecology, peace, society and ethical issues as well as just creating simple pleasure.

May the beauty I have tried to create in the midst of darkness run as a vein of gold and fire across uncharted thoughts. Lee Oswald said, "I didn't shoot anyone," and he also cried out, "I am a patsy!" Two days after his arrest, he was shot down in the presence of over 70 police officers by the gangster Jack Ruby, a local nightclub owner and bagman for Godfather Carlos Marcello. I've painted a portrait of Lee. It doesn't resemble the beaten prisoner. It reveals the man I knew. BLEEDING MOUNTAIN was painted Nov., 1964. if you look closely, you'll see a dark figure lying on his side, rifle nearby.....the mountain is bleeding....that is JF Kennedy...and the man at the bottom is Lee, who died trying to save him, he is at Kennedy's feet, so to speak, but from the dead figure, all sorts of rivers and valleys come springing up...I felt that the truth would come through Lee's sacrifice...it would be saved. TRANSFIGURATION OF JESUS represents the presence of Christ tansforming my life from bitterness and anger to peace and joy that I am alive and this great gift makes it possible for me to speak out, to create beauty, and try to help make the world a better place... STREETLIGHT NEW ORLEANS belongs to a Russian who lives in Moscow. It has sharp pieces of glass embedded in it, representing both the beauty and the danger of New Orleans for me. You can read more about my life in New Orleans in the book by Edward T. Haslam,
Dr. Mary's Monkey, which centers around the unsolved murder of my friend Dr. Mary Sherman. SUSIE HANOVER WAITS FOR HER CAPTAIN IN NEW ORLEANS. Susie owned the house at 1032 Marengo St. in New Orleans where I lived in 1963. Lee located this place for me when I needed emergency housing. He was a kind and intelligent man, nothing as so frequently described. Lee knew Susie from the time he was a teenager. This painting was stolen in Holland. VIKING SHIP PRIMEVAL shows a Viking Ship entering the Fjords of Norway. I had a dream years ago that we would live in Norway. It was painted in 1968 and we (husband, myself, all five children) lived in Norway in 1985-1987. THE ADRIATIC SEA, GREECE. This painting was taken from me in Hungary one day before I entered the EU political asylum system in Sweden after a death threat. 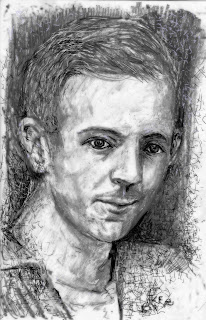 Here is my latest portrait of Lee Harvey Oswald, my best friend and lover of all time. Here he is about to wink, after telling a joke. He had  a great sense of humor! 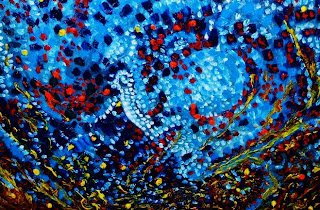